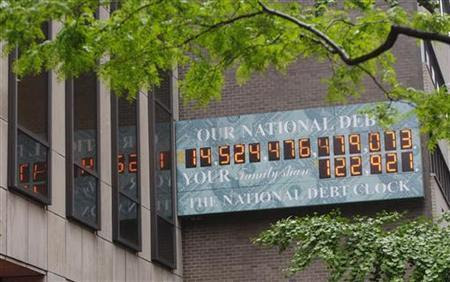 (Reuters) - Republican lawmakers are "playing with fire" by contemplating even a brief debt default as a means to force deeper government spending cuts, an adviser to China's central bank said on Wednesday.


The idea of a technical default -- essentially delaying interest payments for a few days -- has gained backing from a growing number of mainstream Republicans who see it as a price worth paying if it forces the White House to slash spending, Reuters reported on Tuesday.


But any form of default could destabilize the global economy and sour already tense relations with big U.S. creditors such as China, government officials and investors warn.


Li Daokui, an adviser to the People's Bank of China, said a default could undermine the U.S. dollar, and Beijing needed to dissuade Washington from pursuing this course of action.


"I think there is a risk that the U.S. debt default may happen," Li told reporters on the sidelines of a forum in Beijing. "The result will be very serious and I really hope that they would stop playing with fire."


China is the largest foreign creditor to the United States, holding more than $1 trillion in Treasury debt as of March, U.S. data shows, so its concerns carry considerable weight in Washington.


"I really worry about the risks of a U.S. debt default, which I think may lead to a decline in the dollar's value," Li said.


Congress has balked at increasing a statutory limit on government spending as lawmakers argue over how to curb a deficit which is projected to reach $1.4 trillion this fiscal year. The U.S. Treasury Department has said it will run out of borrowing room by August 2.


If the United States cannot make interest payments on its debt, the Obama administration has warned of "catastrophic" consequences that could push the still-fragile economy back into recession.


"It has dire implications for the economy at a time when the macro data is softening," said Ben Westmore, a commodities economist at National Australia Bank.


Financial markets are following the U.S. debate but see little risk of a default.


U.S. Treasury prices were firm in Europe on Wednesday, supported by a flight to their perceived safety on the back of the Greek debt crisis and worries about a slowdown in U.S. economic growth.
Marc Ostwald, a strategist with Monument Securities in London, said markets were working on the assumption that the U.S. debt story "will go away." But nervousness would grow if a resolution was not reached in the next five to six weeks.
'WOULDN'T HAPPEN'
The Republicans' theory is that bondholders would accept a brief delay in interest payments if it meant Washington finally addressed its long-term fiscal problems, putting the country in a stronger position to meet its debt obligations later on.
But interviews with government officials and investors show they consider a default such a grim -- and remote -- possibility that it was nearly impossible to imagine.
"How can the U.S. be allowed to default?" said an official at India's central bank. "We don't think this is a possibility because this could then create huge panic globally."
Indian officials say they have little choice but to buy U.S. Treasury debt because it is still among the world's safest and most liquid investments. It held $39.8 billion in U.S. Treasuries as of March, U.S. data shows.
The officials declined to be identified because they are not authorized to speak to the media.
Oman is concerned about the impact of a default on the currency reserves of the sultanate and its Gulf neighbors.
"Our economies are substantially tied up with the U.S. financial developments," said a senior central bank official, who spoke on condition of anonymity.
"It just wouldn't happen," said Barry Evans, who oversees $83 billion in fixed income assets at Manulife Asset Management. "They would pay their Treasury bills first instead of other bills. It's as simple as that."
Monument's Ostwald called the default scenario "frightening" and said bondholders' patience would wear thin if lawmakers persisted in pitching this strategy in the coming weeks.
"This isn't a debate, this is like a Mexican standoff and that is where the problem lies," he said.
Yuan Gangming, a researcher with the Chinese Academy of Social Sciences, a government think tank, smelled some political wrangling behind the U.S. debt debate as the 2012 presidential election draws nearer and said Republicans "want to make things difficult for Obama."
But with time running short before the U.S. Treasury exhausts its borrowing room, Yuan said default was a real risk.
"The possibility is quite high to see a default of the U.S. debt, which would harm many countries in the world, and China in particular," he said.
(Reporting by Kevin Lim and Jong Woo Cheon in Singapore, Suvashree Dey Choudhury in Mumbai, Aileen Wang and Kevin Yao in Beijing, Abhijit Neogy in Delhi, Marius Zaharia in London and Umesh Desai in Hong Kong; Editing by Dean Yates and Neil Fullick) 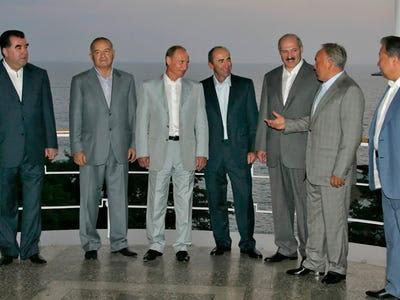 WELCOME TO EURASIA: The 7 Countries You Need To Be Watching

Sanya Khetani | Feb. 17, 2012, 1:17 AM |  |
AP/ITAR-TASSS?Sergei Zhukov/Presidential Press Service
From left, the presidents of Tajikistan, Uzbekistan, Russia, Armenia, Belarus, Kazakhstan, and Kyrgyzstan
It's likely you've never heard of half of the prospective members of Vladimir Putin's plans for a "Eurasian Union".

However, if the plan goes ahead, you'll need to get familiar with them quick.
A Eurasian Union (EuU) including most of the former U.S.S.R. would become a major counterweight to the EU (a Eurasian Union could control up to 33 percent of the world’s proven natural gas reserves, according to Forbes).
Putin, who floated the idea in October of last year, at the time went to lengths to deny that the bloc would recreate the Soviet Union. However, Russia has already gotten many other former Soviet Union states to sign up for a free trade agreement, including Armenia, Moldova, Ukraine (which was initially set on joining the EU), Kyrgyzstan, and Tajikistan. Uzbekistan, Azerbaijan, and Turkmenistan could follow suit.
Click here to see some of the countries that might form part of the Eurasian Union >
Read more: http://www.businessinsider.com/eurasian-union-gas-russia-putin-2012-2#ixzz1nlRCyPQ

The IMF and Europe

Moldova has quietly and steadily been implementing a series of economic reforms, supported by the IMF. In an interview, Nikolay Gueorguiev, the IMF’s mission chief for Moldova, looks at what further reforms are needed to maintain stability and foster balanced and inclusive growth.

Statement by the EC, ECB, and IMF on the Third Review Mission to Portugal


IMF Statement on the Meeting of the Euro Group


Republic of Moldova -- Letter of Intent


Republic of Latvia: Fifth Review Under the Stand-By Arrangement and Financing Assurances Review


Republic of Latvia -- Letter of Intent


Statement by the WB, EC and IMF on the Review of Romania's Economic Program

IMF’s Lagarde on Global Challenges in 2012

Factsheet on The IMF and Europe

IMFSurvey Magazine: In the News

Europe Lending at a Glance

Click on the map for a quick overview of the IMF’s current lending arrangements in Europe.
The IMF in the New World Order, or
Institutions never die, they simply find a new mission
Osvaldo Croci


Prepared for the Round Table The Asian Crisis and the IMF: What does it all mean? Laurentian University, Department of Economics, February 26, 1998.