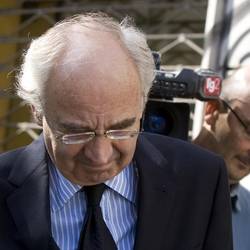 GIACOMO GALEAZZIvatican city Up until two weeks ago, he had been God’s banker and had the key to the Pope’s safe. After he was ousted from his position as head of the Vatican Bank (IOR) Ettore Gotti Tedeschi was dealt yet another heavy blow. This morning his house in Piacenza and two offices in Milan were searched; and although he is not under investigation (he is currently considered an “informed witness”), the shadow of an inquiry which is destined to destabilise the economic and financial establishment he has always been part of, now looms over him. First he was representative of the Spanish giant Banco Santander in Italy and then in 2009 he was President of the Holy See’s Institute for Works of Religion.

Naples prosecutors ordered a search of some residences owned by Ettore Gotti Tedeschi, who was recently ousted from the position he had been appointed to by the Vatican Secretary of State, Tarcisio Bertone. The prosecutors said the search took place in connection with a corruption probe into defence technology group Finmeccanica. Gotti Tedeschi is not under investigation and the search is not linked to his work at the IOR. Ettore Gotti Tedeschi has held and continues to hold roles that are of primary importance. He was President of the Institute for Works of Religion (IOR) from 23 September 2009 to 24 May 2009.  He has been head of the Italian branch of Spain's Banco Santander (Santander Consumer Bank) since 1993.

He has been President of the Italian infrastructure fund, F2i S.p.A since April 2009 and is currently administrative advisor of the Deposits and Loans Fund (Italian Treasury and banking foundations) and economic advisor to Giulio Tremonti’s Ministry of Economy and Finance. For the first 13 years of his career, EGT worked in the field of strategic consultation with SEMA in Paris and Italy and McKinsey in the UK. He then entered the word of finance as head of merchant banking for IMI and co-founded Akros Finanziaria. In 1993 he brought Banco Santander to Italy and as such, became administrative adviser and a member of the executive committee of Turin’s Intesa San Paolo bank, until 2006. He has five children (Riccardo, Corrado, Daria, Federico and Laura) and is married to Francesca.

The search was part of an international corruption investigation into some contracts which were allegedly awarded by companies that are part of the Finmeccanica group in Europe and South America. The investigation was sparked by some statements made by Valter Levitola. The search was carried out by the Italian carabinieri’s (military police) environmental protection squad in Rome. Gotti Tedeschi’s Piacenza home and one of his offices in Milan are currently being searched.

After the vote of no-confidence which cost him his job at the IOR, Gotti Tedeschi received the support of a number of figures in the fields of economics and finance, such as Carlo Castellano, adviser to the Bank of Italy and Unicredit’s Maurizio Lauri. They both sided with him because “never in recent history has the head of an institution been removed from his position with such brutality.”

Gotti Tedeschi’s scandalous exit which was ratified by the Cardinal’s Commission overseeing the IOR has not ended tensions over Vatican finances. The Vatican’s accession to the white list of financially virtuous countries – advised by former minister Tremonti and his advisor Gotti Tedeschi – has been compromised by the opinions of those who fear this would limit the efficiency of the IOR. Bertone (who controls the Holy See’s financial troika) is engaged in a head to head fight with Nicora and Tauran over the management of Vatican finances; a struggle which has led to the downfall of the illustrious Gotti Tedeschi.

If the mole was a knight in shining armour

The issue of the mole, or rather moles, in the Vatican has left many questions unanswered. Too many. ...

Vatileaks and the Vatican’s irritation

Dear friends, I have just finished reading “His Holiness, the secret files of Benedict XVI”

Vatican investigators began interrogating the Pope's butler on suspicion of stealing confidential documents on Tuesday as it was claimed he had been acting as a 'double agent' to help officials uncover others involved in the scandal.

Mr Gabriele has been held since May 23 in a 12ft by 12ft room inside the headquarters of the Gendarmerie, the city state's 130-strong police force Photo: AP

By Nick Squires, Rome
6:49PM BST 05 Jun 2012
Paolo Gabriele, 46, Benedict XVI's personal valet, has been held in custody for two weeks in a "secure room" of the Vatican Gendarmerie on suspicion of stealing and leaking papers which lifted the lid on bitter feuds and power games at the highest levels of the Roman Catholic Church.
However, in an affair which grows murkier by the day, it was suggested by Corriere della Sera, one of Italy's leading newspapers, yesterday that Vatican magistrates knew five months ago that he was behind the leaks but came to a "secret pact" under which he would lead them to other moles.
The newspaper said there was no other way to explain why the butler took the "suicidal" decision to keep some of the stolen documents in the Vatican apartment that he shares with his wife and children, where they were discovered by investigators.
The hypothesis was denied by Federico Lombardi, the Vatican spokesman. It was "absolutely without foundation or plausibility" he said.
The substance of the butler's questioning would not be made public because it was an ongoing criminal investigation, Father Lombardi said.

A trial, however, would be public, and could turn into the city state's most sensational for decades.
The valet was questioned by Vatican prosecutors in the presence of his two lawyers as well as a Vatican judicial official known as the "promoter of justice", as part of the process that could lead to him being charged with "aggravated theft" and put on trial.
If convicted, he could be sent to prison for up to six years, a sentence that would have to be served in an Italian jail, because the Vatican does not have one.
Prosecutors could also charge him with receiving stolen goods, criminal association and stealing secrets from a head of state, crimes which carry additional penalties of one to five years under Vatican law.
Vatican observers have speculated that should he be convicted, he might receive a papal pardon and not have to serve any time behind bars.
"There's no way they're going to give him a heavy sentence for espionage and stealing state secrets," said Father Thomas Reese, a Vatican expert at the Woodstock Theological Centre at Georgetown University in Washington.
Mr Gabriele has been held since May 23 in a 12ft by 12ft room inside the headquarters of the Gendarmerie, the city state's 130-strong police force.
It is equipped with a desk and a bed and has a crucifix on the wall.
The valet, a devout Catholic who was previously seen as intensely loyal to the Pope, is allowed to attend Mass at a nearby chapel, where he is not handcuffed, and to read newspapers. He is served the same meals that are eaten by Vatican gendarmes.
The Vatican's de facto prime minister – who appears to be one of the main targets of the shadowy plot – spoke for the first time of the scandal.
Cardinal Tarcisio Bertone, the Vatican's secretary of state and the Pope's right-hand man, said the theft and leaking of compromising documents seemed to be part of a "ferocious and targeted" campaign against 85-year-old Benedict's papacy.
He insisted that the Pope would not allow himself to be "intimidated" by the scandal, dubbed "Vatileaks" by the Italian media.
Many of the leaked documents appeared to be aimed at discrediting Cardinal Bertone himself, casting in a negative light his apparent attempts to block efforts to tackle corruption and nepotism and measures to improve transparency within the Vatican bank.
Exactly who is behind the theft of the papers and letters remains a mystery, but there is widespread speculation in Rome that they are at least in part an attempt to topple Cardinal Bertone, against a background of jockeying for power in anticipation of Benedict's death and the election of a new Pope.
Vatican investigators, including a specially-appointed commission of three cardinals, suspect at least five other people of being part of the plot, the Italian media claimed.

In Vatican City and Holy See

The Pope in Germany


More from The Telegraph