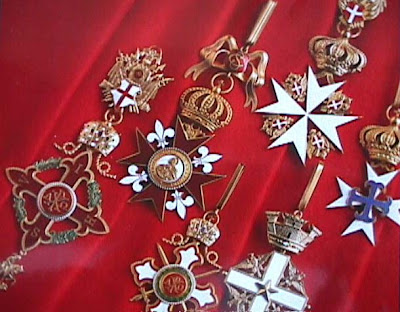 Knights of Malta quotes
Sovereign Military Order of Malta (SMOM)
The grand master of the SMOM order is recognized as a sovereign chief of state by 41 nations with whom the SMOM exchanges ambassadors. [2011] Solving the Mystery of Babylon the Great by Edward Hendrie
The Knights of Malta were also responsible for helping thousands of the worst Nazis and members of the SS escape to freedom down these Ratlines, thus evading justice and avoiding the hangman’s noose at Nuremberg. PRINCES OF PLUNDER By David Guyatt
Opus Dei is a subordinate organization to the Pope, who is in control of the Knights of Malta, and therefore there are Knights of Malta in Opus Dei.
The Jesuits control Opus Dei through the hierarchy of the Pope and through the Knights of Malta. Opus Dei is composed of prominent Roman Catholic businessmen and politicians who have given themselves over to “God’s work”—that’s what Opus Dei means—for making the Pope the Universal Monarch of the world, ruling the world from Solomon’s rebuilt temple in Jerusalem.
An example of this is the former head of the FBI, Louis Freeh, was a member of Opus Dei. And so, we now understand the Waco incident, where those White Protestants were killed; it was the work of the Opus Dei. And we also have to remember that the sharpshooter, one of them there, was a Japanese Roman Catholic, Lon Horiuchi.
But Opus Dei is determined to create a World Government under the Pope. Opus Dei was created in the 20th Century, whereas the Knights of Malta were created in the 11th Century, and the Jesuits were created in the 16th Century, in 1540, with Ignatius Loyola.
So, the super-secret society of the Jesuit Order, in control of the Knights of Malta, were in existence nearly 500 years before Opus Dei. Opus Dei, like the Knights of Columbus, is a subordinate organization to the Jesuit Order. Maniacal World Control Thru The Jesuit Order: Well-Hidden Soldiers Of Satan
The Order of the Garter is the secret inner group which is an elite group within the Order of St. John of Jerusalem which is the British part of the Knights of Malta. The Knights of the Garter are the leaders of the Committee of 300. They are diabolical men. Lord Peter Carrington, who is a member of the satanic Order of Osiris and other demonic groups is a member of the Order of the Garter. Lord Palmerston is an example from history of another similar example of a Knight of the Garter who was totally corrupt, pretended to be a Christian, and practiced Satanism. Bloodlines of the Illuminati 4. DuPonts

J. Peter Grace was the head of the Knights of Malta in 1963. He is the head of W. R. Grace, and he's one of the largest shipping tycoons in the world, in control of all the shipping in South America. Grace is a powerful man, or was a powerful man......Flynn is head of the Knights of Malta now, down in Florida where there new office is. They moved from New York to Florida, I think Bocca Raton. They have 11 Knights of Malta on the W. R. Grace board.  And, of course, guess who owns Taco Bell? W. R. Grace.  So now we see W. R. Grace involved in the poisoning of America with fast-food chains, so everybody gets heart disease, clogged arteries, so they can go to bypass surgery and further enrich the medical profession, while carrying out their medical inquisition. Isn't that clear? So not only are they going to kill all of the American people, but they're going to make billions doing it. The Black Pope: Interview of Eric Jon Phelps
John McCone was a very powerful industrialist, and one who was part of the military-industrial complex, before he became the head of the CIA. He later went on to become part of, I believe, ITT.
John McCone was another Knight of Malta, head of the CIA, and participated in the Kennedy assassination by virtue of him being its head. And he's Knight of Malta.
Angelton is a Knight of Malta. Henry Luce is a Knight of Malta. William F. Buckley is a Knight of Malta. And William F. Buckley then ran the National Review-and what does he do? He blames Oswald as the lone assassin. The Black Pope: Interview of Eric Jon Phelps
The Jesuits obviously wrote the Protocols because they have carried out every protocol in that little handbook. Alberto Rivera says that it was Jews aligned with the Pope who published the Protocols. Well, I tend to feel that it was just the Jesuits themselves because they and they alone, were the ones who were able to bring this to pass.
They're the ones in the government. They're the ones behind professional sports. The owner of the Pittsburgh Steelers is a Knight of Malta. The owner of the Detroit Lions is a Knight of Malta. All your top owners of these ball clubs, for the most part, are Knights of Malta, getting the people whooped up in this hoopla over games and sports, while they're busy creating a tyranny. So, that was one of the things in the Protocols-that they would create 'amusements'.
Another one they used was Walt Disney, 33rd-degree Freemason-Disneyworld, Disneyland. Another one was Milton Hersey, with Hersey Park. They create all of these amusements and games and pastimes to get the people drunk with pleasure, while they're busy overthrowing the Protestant form of government........ the High Knights are good, dear brothers with the High Mafia Dons-the Gambinos, the Lucchese, the Columbos, all of them. And they control Hollywood, not the Jews. It's only Jews who are front-men who are involved in Hollywood and working for the Mafia and for the Cardinal, just like in politics it would be Arlen Spector. Arlen Spector was Spelly's [Cardinal Spellman's] Jew in the assassination [of President Kennedy], and he would never say a word about it.---Eric Jon Phelps


New York, NY, August 27, 2007 … Rabbi Leon Klenicki, the Anti-Defamation League's Interfaith Affairs Director Emeritus, has been knighted by Pope Benedict XVI for his historic contributions in creating positive relationships between Catholics and Jews around the world.  Rabbi Klenicki was made a Papal Knight of the Order of St. Gregory the Great at a ceremony at the Vatican's Mission to the United Nations, presided by Cardinal Sean O'Malley of Boston.


Rabbi Klenicki becomes the second ADL interfaith official to receive papal knighthood. In 1986, the late Dr. Joseph L. Lichten became the first American Jew to receive the honor, from Pope John Paul II.  A renowned scholar and theologian, Rabbi Klenicki joins a select group of living Jews, and only a handful of rabbis, who have been so honored by the Vatican.  Klenicki is the author and co-author of hundreds of books and papers dealing with the theological and practical aspects of improving relations between Catholics and Jews after nearly two millennia of tragedy.
"I am deeply honored by Pope Benedict XVI for my nomination as a Papal Knight of the Order of St. Gregory the Great," said Rabbi Klenicki, who recalled his many meetings through the years with the future pope -- then Cardinal Ratzinger -- whom he praised for "the depth and breadth of his knowledge."
"I cannot describe how much this honor means to me," he said.  "It is recognition of the importance of the interfaith dialogue that has been my vocation and my passion for more than 30 years."
Rabbi Klenicki, a native of Argentina, thanked his high school and university teachers, his family, and his wife, Myra Cohen, whom he called his inspiration.  He also thanked ADL "for the opportunities it has given me to spend more than 30 years in the field of interfaith work."
"We are extremely proud that Rabbi Klenicki's decades of work to help reconcile the Catholic and Jewish people has been recognized by Pope Benedict XVI with this special honor," said Abraham H. Foxman, ADL National Director.  "Leon is a true pioneer in interfaith dialogue and education. I can think of no better person to deserve this honor."
Leon Klenicki received a Rabbinical diploma in 1967 from the Hebrew Union College - Jewish Institute of Religion in Cincinnati.  In September 1967, Klenicki returned to Buenos Aires, where he accepted the position of Director of the Latin American Office of the World Union for Progressive Judaism. He helped develop Reform Judaism in Latin America and lectured widely at the main Latin American Jewish centers. Rabbi Klenicki served as an advisor on interfaith affairs for the DAIA, the main Jewish organization in Argentina.
In October 1973, Rabbi Klenicki joined ADL as head of the Jewish-Catholic Relations Department. He became Director of ADL's Department of Interfaith Affairs in 1984, and ADL's Co-Liaison to the Vatican.  He held this position until his retirement in January 2001.
The United States Conference of Catholic Bishops recommended to all U.S. bishops and cardinals that they observe Holocaust  Memorial Day by using as a liturgy the service prepared by Rabbi  Klenicki and Dr. Eugene J. Fisher, "From Desolation to Hope: An Interreligious Holocaust Memorial Service."  In May 2001, Rabbi Klenicki was honored by the Holy See's Commission for Interreligious Relations with Judaism for his contributions to the interfaith dialogue.
Attending yesterday's ceremony at the Vatican Mission were leading Catholic and Jewish interfaith officials including Archbishop Celestino Migliore, the Holy See's Permanent Observer to the United Nations and Father James Massa, Executive Director of the Office of Ecumenical and Interrreligious Affairs for the United States Conference of Catholic Bishops. EQUESTRIAN ORDER OF THE HOLY SEPULCHRE OF JERUSALEM 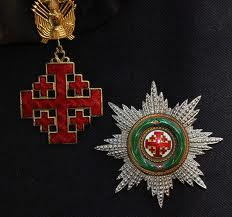